The Duke and I is one of my favorite Julia Quinn books because of Salmon, uh… Simon Basset.
He’s one of the more tragically, Heathcliff-esque of her heroes in my opinion. 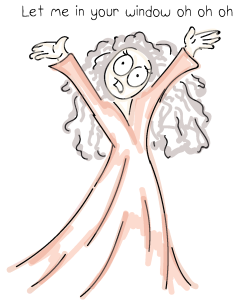 The speech difficulty that so repulses his father is a good character foil; it allows him to be troubled without making him unattractive.

My Bridget over troubled Waters character Debbie has a soft spot for difficult men, case in point, Bridget’s father—so it makes sense to me that she would find Simon to be rather delicious.

The difference between Debbie’s troubled man and Simon is that Daphne is wonderful enough to inspire Simon to become a better man, (insert Pearl Jam reference here), but Debbie is a bit more difficult a woman than darling Daph, and Quiggly (Bridget’s father) is more absurd than Simon, so it was never going to work out.

She lies and says she’s in love with him, can’t find a better man

But I always took it to mean that she tried to convince herself that she loved him because he was so good, that she quite literally could not possibly find someone kinder, braver, more supportive, etc., than this man she pretends to love.

Back to the comic.

While I would never question the appropriateness of my (half-) sister’s books, I think we can agree that children Bridget’s age, regardless of scholastic aptitude should probably wait a few more years before reading them.

Plus, there’s something sneaky and wonderful about not telling other people the details of what you’re reading.

Debbie doesn’t want to explain to Bridget what she’s reading, and certainly doesn’t want to admit that she’s daydreaming about being Daphne, even though her thought bubble makes it pretty obvious she is placing herself in the dance scene. She’s even got a similar hairdo.

In an earlier draft, Debbie is wearing a yellow shirt to match daydream Daph-Deb’s dress, but we did a few test prints and with that much yellow, the page took on a bit too much of a buttery tone, so I changed Debbie’s shirt to a nice cornflower blue instead.

I think what this little anecdote reveals, more than anything else, is that I probably  put more thought into my comics than is necessary.

I had a few variations of this comic where I played around with the joke a bit. In one we saw Debbie explaining her addiction to the writings of Julia Quinn. She told Bridget that after she and Quiggly were divorced, she felt like nothing would ever be okay again, and reading about true love made her feel hopeful and gave her the strength to face life as a young divorcée about to have a baby.

Drawing this comic was good practice for my unyieldingly high art standards.

I could have been lazy and kept Debbie in a simple pose the whole time and saved myself a few hours of work, but I wanted her to be practically melting into the chair at the thought of the overwhelming swooniness of the dance scene.

Such is the life of a mom no?

Delicious daydreams of romance-unparalleled, interrupted by the questions of kids.

And we know Debbie cannot cook at all, so pretending to long for a salmon is doubly funny. 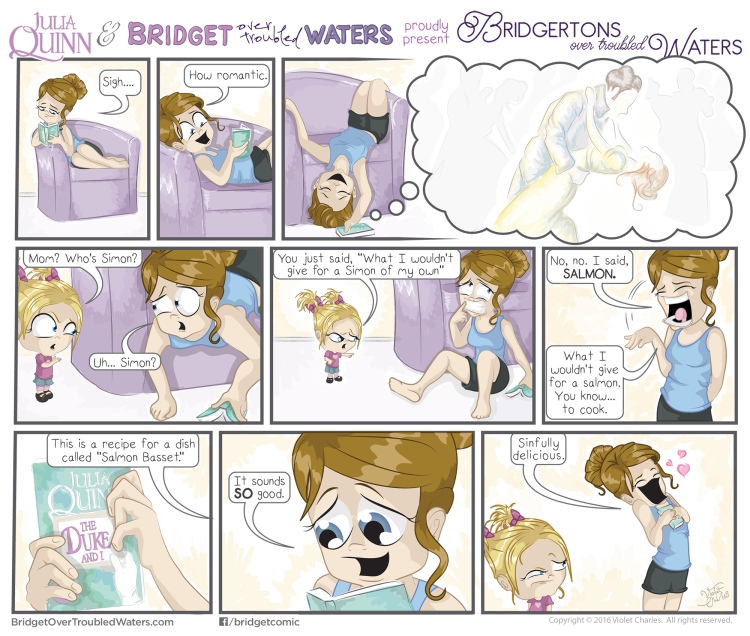