Shampoo is a funny word. And in a matter completely unrelated to shampoo, this is an election year.

People are poised to attack, quivering with political righteousness on both sides of every argument. 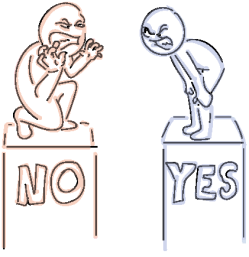 I feel the problem is clear.

A bipartisan system such as the one we have in the United States is, by definition, not united. Bi- meaning of two and parti- meaning party, but not the kind with cake.

And given issues like the constant differing interpretations of our Constitution,  everything that happens in this country has to be agreed upon by these two opposing parties (still without cake).

The 8th Amendment is the one about cruel and unusual punishment.

Now, the phrase is “cruel and unusual” not cruel and/or unusual, which begs the question: is cruel punishment that is not unusual considered constitutional?

What about punishment that is unusual, but not cruel?

Forcing someone to wear a Davy Crockett costume every day for a month, and forbidding them to eat tofu or play badminton is certainly unusual, but arguably not cruel.

Whereas spreading rumors about someone via social media is quite cruel, but not terribly unusual. A child not wanting to shower/bathe is also not unusual.

But most people, somewhere between the ages of 13 and 25, decide they do mind being sticky and resign themselves to the daily task of self-cleaning. And many a free-form parent might say, “Let the kid get dirty. They’ll learn.” Debbie, however, knows how judgmental those other Hazelnut Grove Academy mothers can be. She’s already self-conscious about being one of the scholarship families, so she’s not about to give those “elitist snobby-snoots” any more fuel. And so, much to Bridget’s dismay, shampoo is strictly enforced in the Waters household. And shampoo is still a funny word.