There is a universal truth about siblings, and it is this:

No matter how old, no matter the occasion, if one sibling sticks their tongue out at the other, the other HAS to do it back.

Family get-togethers where everyone gets along aren’t funny.

But when adults are with their siblings and suddenly everyone reverts to a toddler mentality…that is funny. Funny in a comic I mean. I’m assuming in real life it would be upsetting.

Exposition stands out like a manatee in a punchbowl.

So I won’t detail all of my characters here. Tempting as it may be. No manatee punch for me.

I will say that Jackie has always been the snoot of the bunch though. Probably because Jacqueline is such a fancy-sounding name. And because there was a bit-character named Jackie in a show I liked who was the ultimate mean older sister. I think I subconsciously named Jackie Jackie as an homage.

Now, if you pay tribute to your favorite cheese is that a fromage?

Tofu takes on the flavor of whatever else is in the dish, and some people will watch a show or read a book, and then spend the rest of the day acting like one of the characters without really meaning to.

When my husband and I were first dating, one evening he was telling me a story…except he wasn’t. He was presenting it to me.

He was inflecting his words/sentences in a way that suggested a joke was coming, but then there wasn’t a joke; he was still just telling me the story. This was because he had been watching stand-up comedy all day. It’s okay. I still married him.

This is not to be confused with intentionally acting like someone you watched/read about for fun. And anyone who affects an accent (because of what they watched) for more than one sentence needs to be put on social time-out.

We are all subject to TV Tofu Syndrome sometimes, but Jackie has it ALLLLLLLLLL the time. And she only watches reality tv. You know those shows about endless drama nonsense and the people watching it go, “ooooooooo!” because one bratty bimbo insulted the fashion sense of another even brattier bimbo.

So, with TV Tofu Syndrome in full effect, Jackie loves to start fights with her siblings. Especially Debbie, because Debbie can’t not engage. She has to go up on it. She has to gripe about why Jackie is so rude. And it makes Jackie feel important to be griped about. 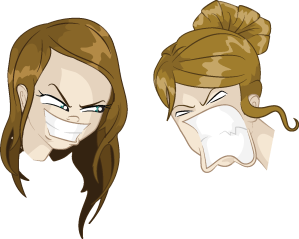 It makes for a good comedy dynamic.

Personally I can’t understand watching that kind of TV.

If I wanted to hear yelling and name-calling I would just hang out with toxic people. And…no thanks to that.

Toxic people sounds like a mutation. Some kind of industrial waste accident in a lake where a nice person goes for a swim and a horrible sneeb of a person comes out. 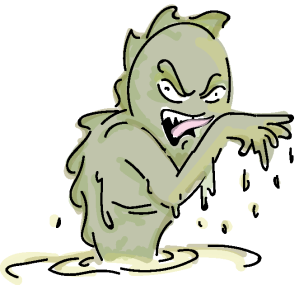 What’s a sneeb? It’s not a real word, but it sounds like something you’d call someone really rude/mean/selfish/conceited etc. “My boss is such a SNEEB!”

You’re not the boss of me.

And YOU’RE not the boss of me.

And neither are you! Because I’m self-employed!

…which is why I have no money.